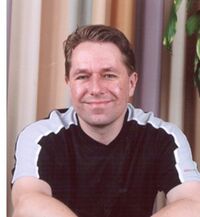 Public appearances by A. Reynolds[]

Interviews with A. Reynolds[]

Community content is available under CC-BY-SA unless otherwise noted.